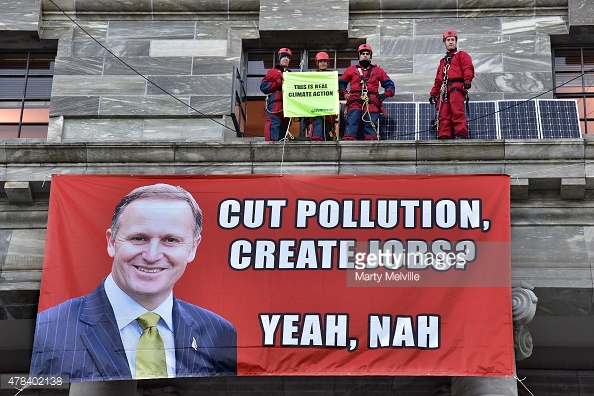 Last Thursday four activists carrying solar panels, scaled Parliament in Wellington in a direct action to deliver a powerful and necessary message about climate change to our PM John Key:

There has been a lot of condemnation and ‘tut, tut, tutting’ and finger-wagging directed at the allegedly illegal actions of these Greenpeace activists. Yeah, I get it: people don’t like Greenpeace or activists in general, especially ones who engage in supposedly illegal actions. Some believe the environmental juggernaut is about nothing more than getting as many donations as they can through their street campaigners (who probably annoy and fuck off more people than they recruit to the cause) and that direct actions like this are for show and controversy for controversy’s sake. Not to draw attention to the defining crisis of our lifetime: climate change.

A Palmerston North Council member posted the Facebook update below in relation to the direct action.  I’m reposting it because I believe it speaks to a wider culture of people who hold simular beliefs around activism.

Let’s break this shit down. First of all, John Key has denied climate change has anything to do with the spate of flooding we have seen recently in Aotearoa which caused mass evacuations. Cycleways may be on John Key’s ‘shit-to-do list’ but climate change certainly isn’t. John supports the dangerous practice of fracking and is all for ‘cash for gas’ and has told New Zealanders it is perfectly safe despite growing evidence to the contrary. In an issue of The New Internationalist, from 2013, when fracking was a relatively new process, Danny Chivers wrote in ‘Fracking: the gathering storm’:

“Some call [fracking] an energy revolution, others a toxic threat. It’s been hailed as the dawn of a new era and condemned as the final deadly fossil fuel rush that will carry us over the climate cliff.”

In 2012, US fracking generated 1,060 billion litres of wastewater contaminated with heavy metals, chemicals and hydrocarbons which was then pumped directly back down into the earth as ‘solution’. Christopher Smith, a microbiologist, recently told me when we spoke about wastewater from fracking: “Many studies have since found traces of these contaminants [heavy metals] in drinking water close to the drill sites and much controversy still surrounds this topic.”

Still, John Key insists fracking is safe. John and his revenue-hungry government have a vested interest in keeping oil companies such as Statoil happy and profitable, not saving our planet from human-induced climate-related destruction and death.

But by all means please, continue to condemn these activists while world leaders continue to make weak climate change deals and get into bed with dirty fossil fuel companies at the cost of millions of lives, and the destruction of whole entire countries such as Kiribati. A pacific Island nation which the IPPC predicts will be swallowed completely by rising sea-levels in our life-time, and whose water source is being destroyed by ocean creep.

Greenpeace activists were not ‘attacking’ the Prime Minster as Neil Miller claimed, but holding power to account – something journalists in this country routinely fail to do.  So often activists who commit illegal direct actions or what people dean ‘immoral’ or ‘offensive’ acts are criticised harshly and condemned by a mainstream media and the wider population and I, for one, am fucking tired of it.  When the law is unjust the law should be broken.  Susan Sontag said in a keynote address, On Courage and Resistance:

‘We are all conscripts in one sense or another. For all of us, it is hard to break ranks; to incur the disapproval, the censure, the violence of an offended majority with a different idea of loyalty.’

Endlessly protesters who have legitimate grievances are told they are, or are portrayed as, ‘dirty hippies’, ‘whinging idiots’ and ‘violent thugs’. In ‘No Justice, No Peace: why the Baltimore riots where justified,’ activist and writer Juan Thompson poignantly points out:

‘Broken lives should always be prioritized over broken windows.’

From Baltimore to Ferguson, black and brown protesters and white allies have been condemned by white Fox News anchors and the wider American population, who took issue with a few broken windows and overturned cop cars. When uprisings erupted over the ongoing police violence and the killing of unarmed black and brown folk and the race and class warfare minorities endure on the daily, in America, we need to ask: what is worse – destroyed property or destroyed lives? What matters more – the lives lost because of police and can never ever be replaced, or possessions that can likely be bought again?

This Council member may have felt the direct action in question was “poor timing”, but when would have been a good time for this direct action to take place? When the shrinking window of time we have left to take deep actions on a global scale to (at least) slow down climate change has closed completely? As the picket slogan goes: “sorry to inconvenience you, we are trying to change the world.”

Perhaps the reason why some people in Aotearoa see actions like those taken by the four Greenpeace activist as “radical” and utterly unhelpful is because our media has mostly kept us ignorant of the devastating human and environmental effects of climate chaos. In polls carried out by both the NZ Herald and RadioLIVE asking if people were in favour of the actions of the Greenpeace activists, mostly, people were in support. But a recent study shows New Zealanders have one of the highest levels of climate change scepticism. The crisis of climate change is to most New Zealanders an abstract issue that probably won’t affect them in their lifetimes. These people are deadly wrong.

I talked about Kiribati before, an island nation which locals darkly joke is about to become ‘the next Atlantis.’  Ioane Teitiota and his family moved to Aotearoa in 2007 from Kiribati and he applied to be the world’s first legal climate change refugee in New Zealand courts. As sea-levels rise his homeland is becoming increasingly uninhabitable; waves crash over storm barriers and are destroying ground-water supplies.

Despite mounting evidence Ioane and his family have been displaced by climate change and will suffer very real and adverse consequences if they return home, the New Zealand Court of Appeal ruled that Ioane was not a climate change refugee. While the international media extensively covered the plight of Ioane, we barely heard a whisper in our New Zealand media.

Instead of condemning the Greenpeace protesters who scaled parliament to draw attention to John Key’s broken promises of creating jobs, and his lack of action and horrific indifference over climate change, I’d rather condemn this callous court ruling. I’d rather be appalled at our media’s complete black-out of Teitiota and his story. But you can’t condemn what you can’t see. It is much easier to call into question the actions of a couple of protesters who posed a ‘security risk’ at Parliament than a judicial system that is yet to catch-up with climate change, at the expense of millions of people who need safe shelter from the storm.

If you would like to learn more about Ioane Teitiota and the consequences  people in the pacific are facing because of climate change, please check-out the links below:

Foriegn Policy: The making of a climate refugee (this is an incredible piece of journalism, and if you want a really good grasp on Ioane’s situation, check this piece out!)

ClimateProgress: Why these tiny island nations are planning to sue fossil fuel companies

If you would like to see interactive ‘before and after’ images of the impacts of climate-change and ocean creep on both Kiribati and the Marshall islands, check out THIS LINK.